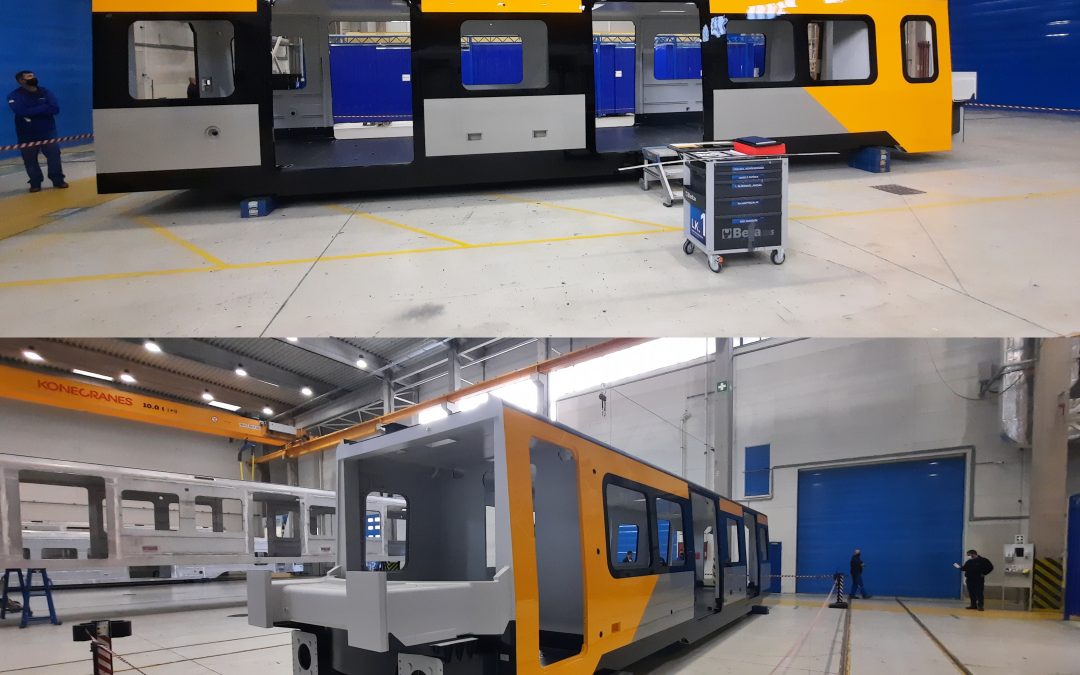 Liverpool, 1 December 2021
Stadler reaches a key milestone in the production of the Tyne and Wear Metro’s new train fleet Stadler has completed the first bodyshell for the Tyne and Wear Metro’s new £362m train fleet, marking a significant milestone in the continuing manufacturing process. Following the signing of the contract in 2020 to manufacture 46 new trains for Tyne and Wear Metro, international rail builder, Stadler, is pleased to have completed the first bodyshell for the trains that it will start delivering to Nexus from late 2022.

The new Metro trains are currently being built at Stadler’s factory in Switzerland. The completion of the first bodyshell paves the way for the seats and other internal features to be installed. And it gives Metro customers a first proper look at the new Metro trains on the assembly line, including their iconic yellow colour scheme. The new trains will entirely replace the current Metro fleet and are set to enter passenger service from 2023. Nexus, the public body which owns and manages Tyne and Wear Metro, said it was a significant moment for a historic project that will transform Metro for its customers, delivering a step change in quality and reliability. Making carbodies involves welding, using welding robots, sandblasting and the application of anti-corrosion protection, before finally, they’re painted. Like many of the processes in the production phase, this stage is very labour-intensive, with teams of people deployed to build the trains being tailormade to suit the characteristics of the network and the client’s requirements. Carbodies are made of aluminium whose excellent anti-corrosive properties ensure that the vehicles achieve their life expectancy. Once carbodies are completed, they will move on to the next stage, known as final assembly. This refers to the fitting of the main components that make up the train, including the bogies, equipment cases, piping, wiring, flooring, windows, seats and other internal fixtures. Project manager, Adrian Wetter from Stadler, said: “Completing the first bodyshell is a highly symbolic landmark in the manufacturing process, and an outward sign that the vehicles are really beginning to take shape, after a period of design and preparation. With the first now ready and painted in the Tyne and Wear Metro colours, we look forward to seeing this stage in full swing, with lots more produced over the months ahead.”

As well as building and delivering 46 new trains for the Tyne and Wear Metro to entirely replace the legacy fleet, Stadler is responsible for building a new depot and for service and maintaining trains, which it has been doing since October 2020. The service and maintenance contract spans 35 years, underscoring Stadler’s commitment to the regional economy. Head of fleet and depot replacement programme at Nexus, Michael Richardson, said: “We are at a significant moment in the production of the new Metro train fleet, and it is really exciting to see the first train on the Stadler production line taking shape in its iconic yellow livery. “This is the first of 46 new Metro trains we have on order. The bodyshell paves the way for the train to be fitted out with the seats, information screens and all of the many other interior items that people fed back on during the extensive public consultation process that we carried out. “The first train will be delivered by Stadler at the end of 2022 and it will enter passenger service from 2023. We are at the business end of an exciting project that is going to transform the Tyne and Wear Metro for many decades to come.”

Stadler is building a total of 46 new Metro trains for Nexus, which will be delivered up to 2024. The new Metro trains, which will be 15 times more reliable and will cut energy consumption by 30 per cent, will have modern features including charging points, air conditioning and a step-change in accessibility. Among the new features will be an automatic sliding step at every door of the new trains, making travel easier for Metro’s 50,000 wheelchair passengers as well as people with push-chairs, luggage or bicycles.