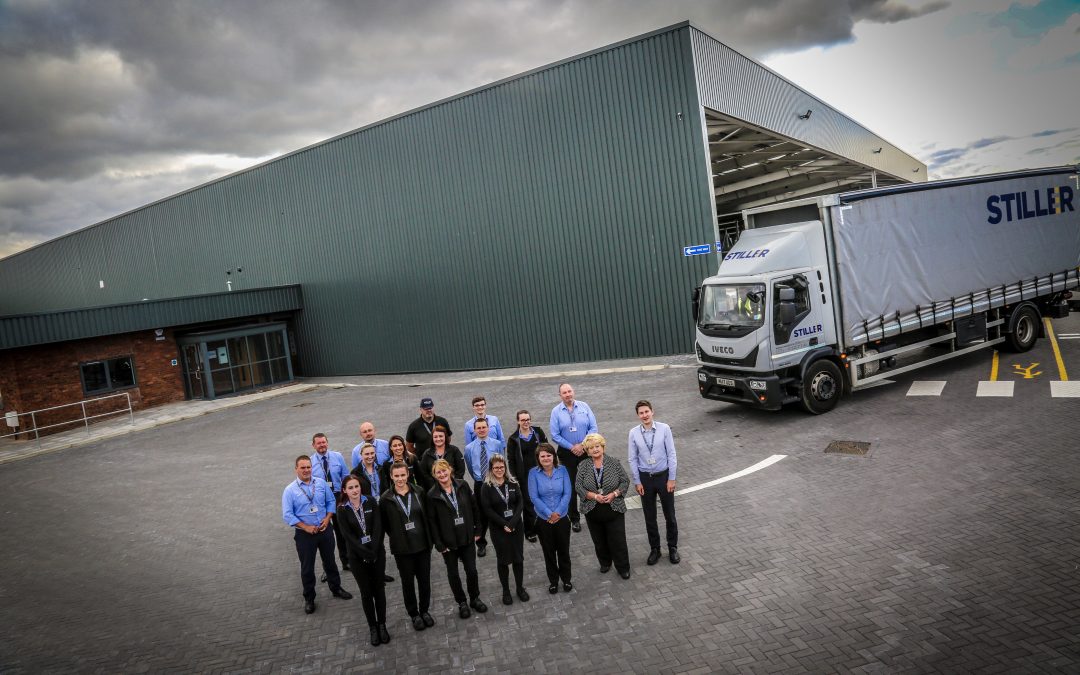 Newton Aycliffe family-run firm Stiller Warehousing and Distribution has created capacity for jobs growth with the opening of its new £2m distribution centre.

After an eight-month construction project, which supported dozens of local jobs by utilising nearby contractors, the state-of-the-art facility is expected to improve Stiller’s in-house trunking system four-fold.

The 40,000 sq ft palletised distribution centre on Aycliffe Business Park is the largest of its type in the North East and allows Stiller to load 32 vehicles at any one time – when its previous system could load eight vehicles a time.

The scheme, which was project managed by award-winning Darlington firm Wharton Construction, has also created more than 70 off-street car parking spaces and includes a new large open-plan office for over 30 office staff.

Meanwhile the previous main offices and distribution centre will be converted and upgraded into extra warehousing for the firm which has seen huge demand for space and growth in the last two years. It’s hoped this will lead to the creation of new jobs in 2019.

Stiller – which was named Company of the Year at Aycliffe Business Park’s Make Your Mark awards in May – has seen sales rise by more than 20% to £14.8m, while staff numbers have jumped from 149 to 174 in the last 12 months.

Managing director Matthew Stiller explained: “We’re delighted to have moved into the new distribution centre, which is already improving our efficiency and service levels to our clients.

“We have built a bespoke facility which we’ve designed specifically for our palletised distribution business, and enables our drivers to off-load and re-load much quicker, both during our day-time shifts as well as through the night.

“We can have 32 lorries loading up at a time, when previously we could only have eight, so it makes for a much smoother and slicker operation.”

Stiller’s latest investment in equipment, people and facilities – including two new warehouses costing more than £1.8m between them – takes the company’s total spend to almost £9m in the last three years.

Stiller added: “Re-investing in the distribution side of the business has primarily been to enable us better cope with the rate of growth we’re currently experiencing.

“And while improving our distribution service, it is also creating more space for us to develop new and improved warehousing for business-to-business storage services.”

Stiller’s new distribution centre takes up five acres of the firm’s 22-acre site at Ridgeway on Aycliffe Business Park, and its construction has supported dozens of local jobs.

As well as main contractor Wharton Construction, which was recently handed the best large company award from Northern Counties Safety Group for health and safety, Darlington-based ADG Architects, Durham civil engineers BDN and PTS Demolition of Shildon are all involved in the project, as well as Aycliffe-based John Wade Group, SCH Site Services, PWS Worksurfaces and Aycliffe Fabrications, while new lighting has been manufactured by Thorn of Spennymoor.

Stiller, formed in 1954, provides cost-effective warehousing and distribution services to businesses in the North-East region as well as commercial property lettings and is also a member and major shareholder in Palletline, a national co-operative network of 70 companies.

Its Aycliffe site stores goods and parts for well-known national brands as well as local businesses including Gestamp Tallent and 3M.