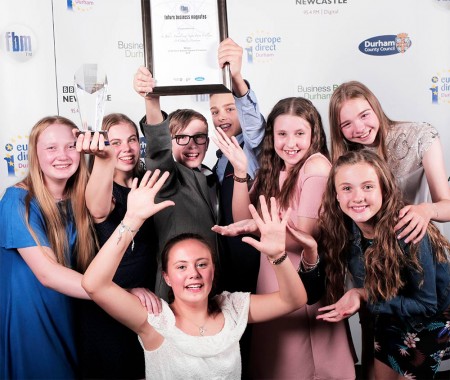 A street lighting system which is triggered by passing cars and pedestrians, and a rewards app for people who scan their rubbish before throwing it away, were just two of the top entrepreneurial ideas students taking part in a popular county-wide competition came up with.

The category winners of the Future Business Magnates (FBM) competition, run by Business Durham, the economic development organisation for County Durham, were crowned at a glittering awards dinner at Newton Aycliffe’s Xcel Centre hosted by Charlie Charlton, a TV presenter and journalist with the BBC.

The FBM competition, now in its 13th year, teams students up with business mentors from companies across County Durham as they come up with ideas and look at how to commercialise and market them. This year, judges were looking for a product or service on the theme of Smart County Durham.

The overall prize went to St John’s School and Sixth Form College, in Bishop Auckland, for their wooden puzzle called Generation Jigsaw, aimed at connecting generations and encouraging conversations in a world saturated by technology. The judges felt it addressed an important concept and had been designed and executed brilliantly by the team.

Sarah Miller, assistant head of year 8 at St John’s, said: “The competition has given them so much confidence in their abilities. It’s the fact that their ideas were listened to by industry experts and that they were able to bring them to fruition. For them to win the competition, not only win it, but win when the competition was so tough, has been amazing for them.”

Chris Lines, director of Right Lines Communications, said:  “I was hugely impressed by the team at St John’s.  They grasped the challenges of the various tasks really quickly. It’s exciting to see such talent and enthusiasm emerge from schools in County Durham.  If these young people become the business leaders of the future, then the future is bright for this region.”

Second place went to Durham High School for Girls for their Way Ahead Lights, motion sensor street lighting, which addressed a key safety issue for rural communities in County Durham, while third place was scooped by Wellfield School, in Wingate, for their fitness box, Well Fit, aimed at showing young people how keeping fit, and eating the right foods can actually make you smarter.

Sarah Slaven, Business Durham’s business development director, said: “It never ceases to amaze just how bright, committed and entrepreneurial the students are. Their ‘smart’ ideas to create a product or service which makes a difference to the way we live, were fantastic. They were made all the stronger thanks to the support of our dedicated business partners who helped them look at ways to bring their ideas to market.”

Cllr Katie Corrigan, vice chairman of Durham County Council, said: “It is clear from the ideas put forward through the Future Business Magnates scheme that County Durham’s young people are incredibly clever, creative and talented. I was extremely impressed by them and honoured to be able to present the awards to the winning schools.”

Eighteen schools took part in the competition. The full list of prize winners were: